As one of the premier neighborhoods in Charlotte, NC, Myers Park is known to be an area filled with fine homes, tree-lined streets, and curving drives. Home to many of the early banking, textile, and real estate leaders of the area, the neighborhood is of statewide and national significance as it was shaped during a time when Charlotte was becoming the world’s leading textile manufacturing region. It remains a symbol of prosperity to this day as one of Charlotte’s most desirable neighborhoods.

The Development of Myers Park

The history of Myers Park begins with its namesake, John Spring Myers, coming into his inheritance in 1869, which included 306 acres of farmland. While Myers built his own country home on the land, he had dreams of transforming the area into a fine suburb. Although Charlotte was growing outward from center city, it would be challenging to convince the town’s leading residents to move to his land far out into the country. Luckily for him, he met a young business tycoon working in the real estate and banking industries named George Stephens that would become his son-in-law and make his suburb a reality.

After establishing partners and investors for the project, Stephens bought the land from Myers a section at a time, paying for each part as lots were sold. To develop the neighborhood design, Stephens brought in his colleague John Nolen, a young landscape architect from Harvard who had been involved in several park design projects in the area. The pair planned for homes tailored to a mix of economical statuses and incorporated shopping and other commercial real estate projects into the neighborhood. Nolen and Stephens also saw educational institutes as a key part of a well-planned community which resulted in the building of Queens College as well as an elementary school nearby.

When it came time to design the streets of Myers Park, Nolen drew curving avenues that followed the topography of the land. The street plan was much more complicated than other neighborhoods with varying street widths focused on ensuring residents’ privacy and discouraging constant traffic. The design accommodated the trolley so that no resident was further than a 2 and a half-mile block walk from mass transit to the center of the city.

Following the development of the nearby neighborhood of Dilworth, Myers Park opened in late 1911. In 1917, Earle Sumer Draper took over the design work for the expansion of Myers Park, particularly around Queens College. Keeping to the original trademarks of the neighborhood, he kept curving streets, trees, gates, and other features in the plans. The neighborhood continued filling out, mostly with upper-middle-income dwellings until the 1950s. At this time, builders started to drift away from the design concepts of Nolen and Draper, leading the outlying areas of the neighborhood to reflect less planned out styles. By the 1960s, the rise of the automobile forced redevelopment on Myers Park, particularly around the streetcar line. While the new construction threatened the beauty of the area, much of the neighborhood design holds steady to this day.

The Impact of Myers Park on Suburban Planning

The design concepts Nolen executed in Myers Park, as well as the Olmsted Brothers’ work in Dilworth, forever changed the concept of suburban planning in Charlotte. Few suburbs in the United States have exhibited this level of planning. The neighborhood’s planning was so significant that it became a model for surrounding cities and saw the rise of many southern landscape artists including Draper, who went on to plan hundreds of neighborhoods across the south inspired by Myers Park.

The architecture in Myers Park is primarily based on the Colonial Revival style but also includes a number of bungalows and the finest collection of Tudor Revival homes in the area. The area is home to examples of the best work from the region’s early leading architects including C.C. Hook, Louis Asbury, and J.M. McMichael as well as a national designer by the name of Charles Barton. Most homes are 1-2 stories on tree-shaded lots and are predominantly made from brick, weatherboard, and wood shingles.

Myers Park has remained a desirable residential area, a fact due largely to the quality of its design. The fine houses and grounds, set back from the street under the spreading trees, were as much a part of the planners' "unified design" as were the streets and parks. If you are thinking of moving to this affluent neighborhood in Charlotte, NC, then let us help you find a home! Check out our luxury neighborhoods of Kings Manor and 1500 Queens for available homes and lots and schedule a consultation with our team when you are ready. 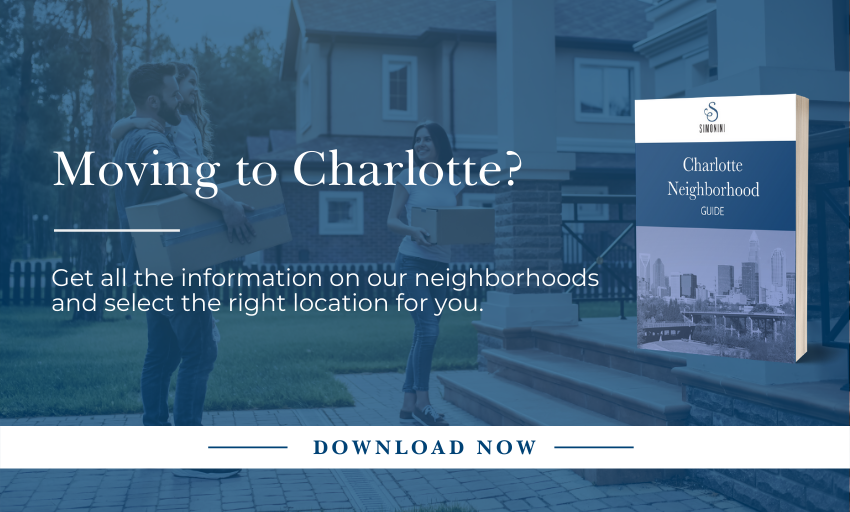