Dilworth was Charlotte’s first suburb, spread over about 63 blocks on about 395 acres, and was the first suburb to have streetcar transportation. Thanks to the work of the entrepreneur, Edward Dilworth Latta, Dilworth became a highly popular area during the post-Civil War reconstruction era thanks to modern industrial advancements and a focus on quality living. The historic details have been well preserved as the charming neighborhood of Charlotte has grown and evolved into a present-day haven that many Charlotteans flock to.

Edward Dilworth Latte was an advocate of the industrialization of the South, which he and others believed would result in a New South, that would rise up from the travesty of the Civil War. Born in Pendleton, South Carolina, Latta experienced the devastation and depression the chaos of the Civil War had inflicted on the area as reconstruction took place. While he attended Princeton University, he was exposed to the industrial growth of the North and saw urbanization as a way to raise the South from its post-war depression. In 1876, he began his work, starting a men’s clothing store that later turned into a clothing factory. He then formed the Charlotte Consolidated Construction Company in 1890. Around this time, Latta also acquired a gas franchise an electric street contract. After purchasing over 400 acres of land, he brought the concept of the streetcar suburb to Dilworth. In addition to the convenient streetcar line, Dilworth also offered a ninety-acre amusement complex named Latta Park. Featuring a pool, pavilion, boating pond, scenic walking trails, and a theater for plays, the park was a big selling point for higher living and is still one of Dilworth’s favorite attractions today.

Many of the first homes in the area were built for Charlotte business leaders and were located along East Boulevard, the grand entry to the neighborhood. However, the idea behind Dilworth’s development was to provide convenient and available housing for Charlotte’s growing population as a whole. So, to encourage more middle-class movement to Dilworth, Latta had created a long-term payment plan to enable families to be able to purchase and move to the area. In 1907, Dilworth was annexed into the City of Charlotte, which spurred further growth in the neighborhood. This, as well as the economic boom at the time from the textile industry, brought a large jump in Dilworth’s population, from a mere 18,000 to over 34,000 people. In 1911, Latta decided to embark on further expansion and enlisted the help of famous landscape architects, the Olmsted Brothers, to plan both the southern and northern expansions of Dilworth. With growth and development in full swing, Charlotte soon surpassed New England in textile manufacturing. The area remained popular well into the 1950’s and underwent a period of rehabilitation in the 1970’s.

A number of architectural styles stand in Dilworth today with many reflecting late Victorian and colonial revival styles that have been refurbished within the last ten years. A number of these style of homes in the district were designed by the architect, Charles C. Hook. The bungalow was also introduced to the area during later expansion periods thanks to an architect named Fred L. Bonfoey and quickly became the most popular form of residential architecture. The integrity of the early-twentieth-century neighborhoods has been preserved well with few intrusions and commercial developments. Mixed in with these historic homes, you can also find many luxury neighborhoods that feature new construction city homes in Dilworth.

Recognized for its importance in Charlotte's history, Dilworth was granted protection as a local historic district in 1983. In 1987, Dilworth was added to the National Registry of Historic Places.  The neighborhood has 1,025 structures designated as historically significant and is now one of the most desired neighborhoods in Charlotte, NC. With historical charm, refurbished for modern-day needs, the homes in Dilworth are the epitome of comfortable living right in the heart of the city. Simonini Homes are proud to offer a wide selection of homes in the area. If you are interested in moving to Dilworth, give us a call today. 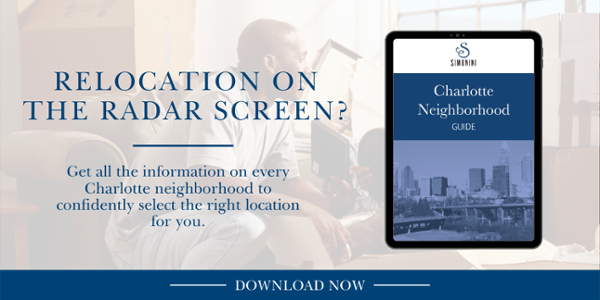